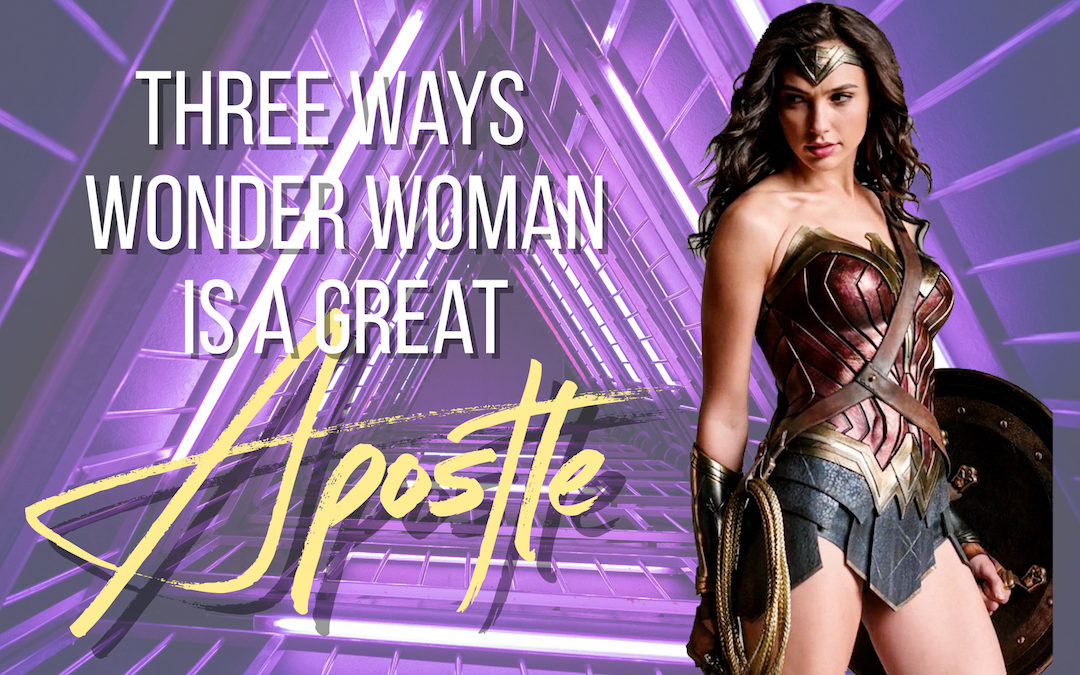 So…in order to unpack that title, we have to watch a great clip from the new Wonder Woman movie. It’s a little over a minute long, but there is some seriously great Apostle dialogue. Hit play!

As we explore APEST, the Apostle is a wily one to find archetypes to use. I guess we could watch the movie, Jobs, but that would be the boringest blog post ever in the history of boring blog posts, unless you really love that movie. So, this time we are going to work with archetypal moments, dialogue instead of a character study like we did with the Teacher.

The new Wonder Woman movie gives us just that dialogue.

So, picture the scene. There’s this island. Wholly inhabited by warrior women. These warrior women are training everyday to be the greatest warriors in the Universe. They train just in case a war ever happens to come to their island.

Let’s say this again. They put all their energy into training to become the best they can be at fighting a war that might never actually happen. Maybe it will. Maybe it won’t. But if it ever does. They will be ready. And who cares?

Does this remind you of anything?

Yes! The Church. The church tends to huddle on an island of learning, decades of learning, training for the day that hordes of non-Christians will descend upon us begging for us to share what we have learned in an epoch of Sunday School, saying, “Please teach us what it means to have eternal life in Christ!”

The Apostle can’t sit around and wait for what is never going to happen. They go and happen to the world.

The Apostle can't sit around and wait for what is never going to happen. They go and happen to the world. #APEST Click To Tweet

Fortunately for us, Wonder Woman can’t sit around either (or else that would have been the most boringest movie. Even more boringer than Jobs!)

“I cannot stand by while innocent lives are lost. If no one else will defend the world from Ares, then I must. I have to go”

Apostles can not stand by. They go because they are sent.

“But he said to them, ‘I must preach the good news of the kingdom of God to the other towns as well; for I was sent for this purpose.’” (Lk 3:34; ESV)

It’s not in the Apostolic nature to sit and wait for the mission to come to them. They say, “If no one else will go, then I must.” Faith in Jesus only makes sense in as much as it is moving out into the culture beyond the church. “I have to go!” the Apostle proclaims. They love the mission and the mission requires movement.

Diana’s mother tries to prolong the departure by saying, “There’s so much you don’t understand.”

It’s like the Teacher who tries to keep all the energy within the church walls saying, “I realize you have to go, but you haven’t studied Ecclesiastes yet. Stay until you’ve marinated in the Hebrew word for vanity and then you’ll be ready. Well, I mean, after my book study on NT Wright’s When God Became King. Then you’ll be ready…although I’m preaching a sermon series on dating that you probably don’t want to miss. How about Spring 2022? I haven’t even started planning beyond that!”

In response, Diana says, “I understand enough. And I’m willing to fight for those who cannot fight for themselves.”

The Apostle learns by doing, the Hebrew form of understanding. Learning is active. To be willing is to be learning.

The Apostolic hunger for learning is great, but they are willing to learn as they go. They don't need a classroom. #APEST Click To Tweet

Diana’s mother serves up the kill shot: “You know that if you choose to leave you may never return.”

This strikes at the core of Apostolic identity! Who would I be if I didn’t live into who I am? Who I am made to be?

“David Garrison challenged: If we want to be on mission with God we simply must pause long enough to understand how God is on mission. Only then can we know with some degree of certainty that we are aligned as his instruments and not misaligned as his obstacles.”
― Peyton Jones, Church Zero: Raising 1st Century Churches out of the Ashes of the 21st Century Church

To be an Apostle, is to go.

No matter the cost.

So, we say thanks to Wonder Woman today, who has sacrificially given an example of what it is to be an Apostle.

Go! And rock your inner Wonder Woman! (Hello! Somebody Tweet that!)