An Apostolic Review of The Greatest Showman 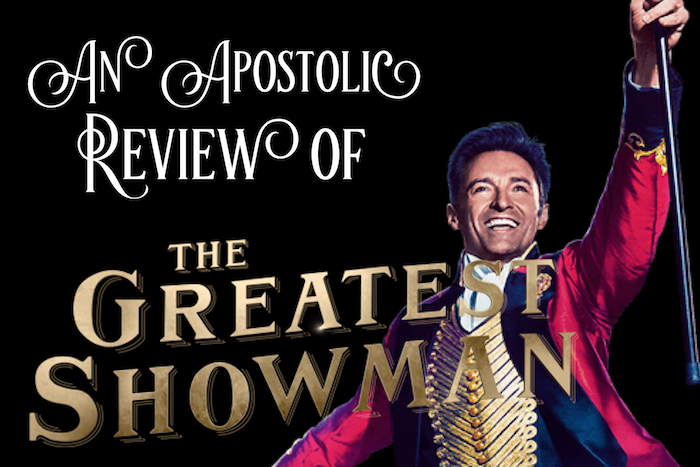 In this post, I’m going to review (sort of) The Greatest Showman and list four ways this film can provide inspiration to the Church right now.

Church, we are a three ring circus of barbarians and bearded ladies, misfits and dog boys racing toward the light. There was never a room built to contain us, a fire lit to sustain us. We crave life. Click To Tweet

Every so often, a movie comes along and just blows me away. The Greatest Showman did that. I have to confess that I have a really really useful Musical Theater degree, so I have a soft spot for the occasion singing number, but dang!!! What a surprise!

<<There might be SPOILERS AHEAD – although, I’m not positive that spoilers can actually be a thing with this film. Either way, if you haven’t seen it, do so.>>

I’m not going to extol the virtues of the creative team. You can check them out yourself here on the handy IMDB site or the official fancy website. I will say that the musical duo of Benj Pasek & Justin Paul are CRUSHING it, though. And…that’s not the point.

<geek>Recently, I’ve been reconnecting with my Dungeons and Dragons roots and I can’t seem to help looking at this post like a D&D Character: P.T. Barnum, Apostolic Performer – a new battle class for church growth.</geek>

It stands to reason that a character class of Barnum’s nature could be really useful for the Church, especially church planting.

Here are four ways that The Greatest Showman might help the Church become everything that it was always meant to be:

Dreamers have dreams. It’s what they do. It’s what happens to them. A dreamer can’t not dream any more than a song can’t be unsung. We need to make room for dreamers. There’s this beautiful scene that I totally connected with in the early moments of the film. It’s early in the character development and Barnum is discouraged, unable to claw his way out of the doldrum 9 to 5, not living into the man he was created to be.

Forced to build an impromptu birthday gift for his daughter, Barnum contracts a carousel of light that puts him into the trance; he received an apostolic vision. Can that happen? Heck yeah, it can.

In a moment, an accidental moment, he sees it: The Show. And, of course, the show is a feat of inspiration and imagination that moves those on the margin into the spotlight; to show people what they will not see, to make them applaud those that they would not make eye contact with.

Church, we are a three ring circus of barbarians and bearded ladies, misfits and dog boys racing toward the light. There was never a room built to contain us, a fire lit to sustain us. We crave life. It takes a new song to make us grow.

2) The spotlight illuminates more of what is inside than is on the outside.

In a beautiful moment between Barnum and the bearded lady, she tells him, “the world was ashamed of us, but you put us in the spotlight. You gave us a real family.”

Barnum wasn’t afraid of the light, he loved it, shared it. One aspect of this film is about beauty, where it lives, what it is. Taking an outcast out of hiding and putting them on stage, shining a light on them is what it takes to see the beauty of who they are; the joy that burns within them; power and passion that oozes from the nuance and uniqueness of their being.

The spotlight throws a brilliant gloss on the outer presentation, but what it really illuminates is the inner person. The light breaks through shadows wherever they are the darkest. Every preacher knows this is the truth. Or, if they don’t, they will.

In another touching scene, Barnum is talking with his greatest critic, journalist James Gordan Bennett. Bennett makes perhaps the churchiest observation of the whole film: “You are putting folks of all kinds on the stage with you, presenting them as equals.”

The light doesn’t judge based upon looks. It seeks out the darkness. Sound familiar?

Great stories have wins and losses.

Luke doesn’t star in any good movies after Return of the Jedi.

Barnum’s dream isn’t a straight line upward. He has great vision that relies upon great risk. His dreams have dreams. Apostles know the algorithm of dreams. It can move from success to failure with unintended speed and accidental purpose.

The Great Showman has so much to teach a Church that is “hellbent” on doing things exactly the same, over and over again. I understand tradition and all that (perhaps soon I’ll write a post on the Christmas movie “Deck the Halls,” which is a brilliant case study in tradition vs. acceptance), and we need orthodoxy and continuity, but you can’t argue with decline and what if, just what if dreams and imagination are what we need to turn things around? Not just turntables in the worship band, but re-dreaming the “Show” from the ground up P.T. Barnum style. Yeah, I realize that without an hour to spend solely on theology that is a risky statement to make but I said it before and I’ll say it again:

With great vision comes great risk; and with great risk comes great success...and great failure. Some failure is worth the risk. It might lead to success. Click To Tweet

Jesus has nothing to fear from P.T. Barnum. He made him!

4) “No one ever made a difference being like everyone else.”

Needing absolutely no explanation, it’s now time for a singing number (that makes the point). AND OH WHAT A FREAKING SINGING NUMBER IT IS!

If you do not have goosebumps, you might want to make an appointment with your mortician.

We will make it up as we go. We will shine in the spotlight. We will be the only people we can be: ourselves. In our imperfections and shattered pieces, in our doubts and debts, we will sing a new song and the love of Jesus is all that will be seen.

Oh, what a show that will be!

The world awaits what it has never seen before.