Who Are Your Ride Or Dies? 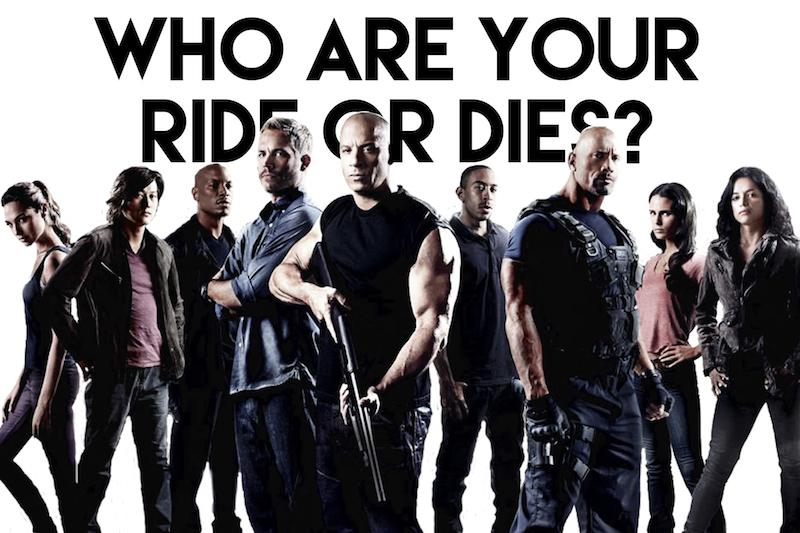 So, here’s a question that the Church doesn’t ask often enough:

“Who are your Ride or Dies?”

I’m throwin’ back to The Fast and The Furious, but that’s only because they are just about the best film franchise ever! If you disagree, keep it to yourself, because you’d be wrong.

So, who are they? You Ride or Dies?

The friends that you live to Ride with or Die for?

The Fast and The Furious films are about one thing: Family.

Family rides together or dies for one another (or so the films would lead us to believe). It’s a beautiful idea, a noble ideal. And, it’s what so many wish the Church lived into to a greater degree. It’s what Jesus calls us to, what the apostles teach us. We are a mixed and reckless group of revolutionaries racing toward uncertainty because of love.

Dom Toretto is a Shepherd.

As you know (or don’t), the point of this blog is to catalogue compelling illustrations of the five-fold personalities. To look into culture, the world and the people around us and mirror archetypes and archetypal moments back into Scripture to help us to see and understand the mechanics of APEST typology.

For those who don’t speak seminaryese (the preferred language of the professional Christian), this blog provides examples of people (in fiction and reality) that are good illustrations of the Apostle, Prophet, Evangelist, Shepherd and Teacher.

It’s kind of a companion to 5QCentral.com, where Alan Hirsch leads the Permanent Revolution and I operate as the editor at large.

Dominic Toretto is my current favorite portrait of Shepherd.

He leads, invites, includes and equips.
He protects, takes the first hit, and the last.
He builds teams.
He lets people do what they are great at, greatly
He gets snappy dialogue.
He keeps his people first on his list of priorities.

He provides a center.
He provokes his family to be the most them they can be.
He models insane driving skills, giving his people a model to emulate, a target to shoot for.
He mentors and disciples.
He is gravity.
He is center.

There’s a beautiful picture of Shepherd in that.

Toretto’s place is on the road…with other drivers.

Dom Toretto makes sure that Ride or Die has meaning.

I get that this metaphor breaks down because of the criminal behavior and we don’t usually ascribe that to Christian life, but look at it this way, Toretto’s family races into risk for and with one another. C’mon! Give me that one.

Shouldn’t the Jesus tribe, the Church, be able to say the same?

If The Fast and The Furious was about sitting down on the sofa, getting comfortable and talking, would you have wanted to see it?

Of course not! Because, we long for Ride or Dies! We desire tribe so deeply that we want to jump through the screen and join them.

We know how to be safe and comfortable, Church.

It’s time to Ride or Die.